Scam Alert – Tax Time Is The Perfect Time For Scams 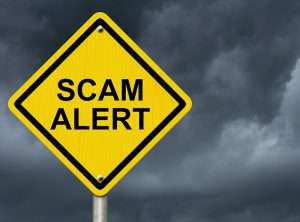 Yet again, the ATO is warning tax payers against fraudsters attempting to scam them by posing as ATO representatives.

In 2015 almost 87,000 phone and email scams were reported to the ATO, an increase of over 90 per cent from 2014. From January to May this year, the ATO has received over 40,500 phone scam reports. Of these, 226 Australians handed over $1.2 million to fraudsters and over 1900 gave out some form of personal information, including tax file numbers.

Assistant Commissioner Mr Graham Whyte said that while most people were able to identify scams, it is important to remain alert during tax time.

“Most Australians are pretty good at catching fraudsters in the act. This is clear from the amount of scams reported to us compared to the number of people handing over money and personal information,” Mr Whyte said.

“We encourage people to continue to be vigilant and to protect their personal information by keeping it private.”

Mr Whyte said that although the ATO makes thousands of outbound calls to taxpayers a week, there are some key differences between a legitimate call from the ATO and a call from a potential scammer.

“We would never cold call you about a debt; we would never threaten jail or arrest, and our staff certainly wouldn’t behave in an aggressive manner. If you’re not sure, hang up and call us back on 1800 008 540,” Mr Whyte said.

“Lately, we have been receiving reports of a variation of this aggressive tax debt scam, where callers impersonating ATO officers demand payment via iTunes gift cards and pre-paid Visa gift cards purchased from supermarkets and department stores.

“We will never request the payment of a tax debt via gift or pre-paid cards such as iTunes and Visa cards. Nor will we ask for direct credit to be paid to a personal bank account.”

Mr Whyte said while the ATO does communicate with people via bulk email, it would never request personal details, such as banking information. If such personal details were required, you would be redirected to ATO Online services.

If you think you have been contacted by a fraudster or have fallen victim to a phone scam, contact the ATO on 1800 008 540 or give us a call if you have any concerns relating to your tax affairs.